So You Want To Be A Makeup Artist

I am a certified Makeup Artist.  I have always loved makeup, but I decided to take it “Pro” in 2012, attending school in Niantic, Connecticut and earning my Certification.  In today’s day and age, the Social Media world is FILLED with self-taught makeup artists, some of them with a skill I don’t think I could ever begin to master.  So why bother with the schooling?  Did I really just pay several hundred dollars for a certificate?  There were moments when I certainly thought so, but I’ve moved on from my own negative thoughts.  I wanted to learn more, so I did.  I wanted to be more, and so I am.  I took myself on a journey, and while day to day the struggle felt the same, I can look back now and know that everything is different; for the better.

It has been 5 years since I became certified, and I haven’t stopped learning.  That is how it should be.  I may be a creature of habit, but even I know you can’t stand in the same spot and expect nothing to change.  I worked; I worked at my skill, at my technique, and at the example I wanted to set for my children.  Somewhere in those 5 years of working, I lost myself.  I put things on hold while my family grew, and moved from place to place; but I knew I needed to keep working towards something.

For the first year after earning my Certificate, I worked with anyone and everyone I could get my hands on.  I practiced on myself, friends, and even hosted in-home events for my moms friends to talk to them about my newfound knowledge of skin care as we age.  I also worked with as many Photographers in the area that were willing to work with me for TFP (time for print).  I wasn’t making any money, just connections, and people can be worth their weight in gold. 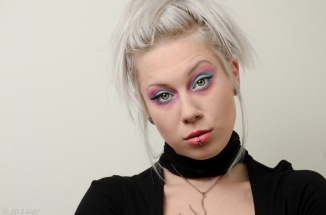 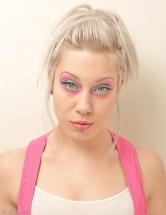 The photos above are from the first time I ever worked with a photographer.  He was interested in building his portfolio, and came to my house.  The model, was a (gorgeous) experienced model, and she was also my hairdresser at the time.  The backdrop is just the white wall of my living room, and the photographer brought his own lighting. You work with what you have.  Photographer: JD Liddil.

I took a risk when I decided to try my luck at being a free-lance makeup artist.  I had some paying gigs through friends and neighbors here and there.  I managed to pull off my first-ever wedding in 2013, doing makeup for my Bride friend and her 4 bridesmaids.  That was a little stressful, because I had never done wedding makeup before, let alone 5 people on a time crunch.  The fact that she trusted and believed in me, was enough.  She looked beautiful by the way, but she didn’t need makeup for that.

I made a new Photographer friend along the way named Victoria Pavlov.  She and I hit it off right away, and she was more than willing to let me explore my artistic abilities on her willing models faces.  We had a lot of fun afternoons in her studio, dreaming up concepts, and putting our ideas into reality.  I will be forever grateful to her for opening up her time, her studio, and her heart to me.  When you are “finding” yourself as an artist (in any form), you need people like her.  Her and I have gone in very directions since we parted ways, but if you would like to take a look at some of her work now Click Here.

The interesting thing about art, is it’s subjective.  Not everyone is going to love the same thing.  I like the wild crazy makeup looks that take over Instagram in October, but I love them year round.  I don’t feel nervous when I am free to create; just excited.  If the only thing I need to worry about is what my client is allergic to, I call that a good day at work.  It’s when someone wants a beauty look, then I start to sweat.  Everyone has this idea already in their head of how they look, and how they want to look.  Expectations can be a real killer.  It is part of the reason why I never bothered to learn to do hair; too much pressure.  At least with makeup you can wash it off and start again.  (I should also mention that I just hate doing hair.  My daughters are lucky I even learned how to braid.)

One of my favorite photo-shoots of all time is with NKP Images.  This was another photographer who let me have freedom in my makeup art.  He was looking for something more out of the box, and was excited for us to collaborate.  The drive to his home was a long one for me, otherwise we would have worked together more, but I cherish the images we share.  The funny thing is, the model hated the makeup.  She didn’t refuse to do it, and was a champ during the entire process, but she was less than thrilled to have gold latex on her face.  I think she was hoping for something a little “prettier” since she had a dinner to go to afterwards.  That being said, it doesn’t tarnish the memories for me.  The final product came out stunning, and is still the image I look at when I feel like I need to “find” my creative side.

I started a full-time job in 2013, and then welcomed my second daughter in 2014.  My husband was deployed was she was barely 5 weeks old, and didn’t return as a full-time dad until her 1st birthday.  I suddenly found myself very over-whelmed, and very busy.  Makeup was just going to have to wait.

When my husband returned and life felt a little more normal, I started to return makeup, but more as a hobby.  I started to create looks only on myself, and then on my oldest daughter.  I found that after not “playing” with makeup for awhile, I had lost some of my ability.  The creative desire was still there, but the skill was lacking.  I started to learn all over again.  In the short amount of time I had taken off from makeup, it seemed like the entire world had changed.  Eyebrows were “on fleek”, lips were being plumped, and clown contouring was suddenly a thing.  Admittedly, I felt a little lost.  How could I keep up?  Was there anything about my ability that was different?  At one point I had thought I had found my niche, and then just as quickly, I lost it.

October 2015 roused my spirit just a bit.  The husband was home, the baby was napping, and I locked myself in the bathroom to “create.”  It was just one of those days where I had this whole-body urge to just DO something creative; and I did.  The makeup look, pictured below, soothed my spirit.  Even though I wasn’t working as a Makeup Artist, I still felt like the artist in me was alive.  I re-created the look on my oldest daughter a few days later, turning her into a ghoul pirate (she had a pirate costume that year), and she won “most creative” at the Halloween costume contest that night at her school.  She’s asked me to do her makeup every year for Halloween now.

In 2016, we welcomed our third daughter.  I stopped working while I was pregnant with her.  My husband was back to being in and out to sea, I didn’t feel well most of the time.  Our lives have been a roller coaster since my last little girl was born, but that’s because we made a big move at the beginning of this year.

Now here I am, almost a year later, with a new address, new home, and a new stay-at-home job.  I have started to ease myself back into makeup.  Just kidding, I just flew to Connecticut two weeks ago to do makeup on another Bride friend and her 4 bridesmaids.  Nothing like a little wedding makeup to make you question your abilities.  It was a learning experience for me, and a good one at that.  I was actually able to attend the wedding ceremony in pride because the bride looked beautiful.  Naturally she looked beautiful because she’s a beautiful person, but I also took great pride in how her makeup came out that day.  It made me see that I had come a long way from the first time I ever did a Bride’s makeup.  It helped that the week’s leading up to the wedding I was playing with contouring, eyeliner, and glitter, just to feel prepared.  My 10 year old was very patient with me while I practiced on her, since the bride didn’t live close by.

Hard work pays off, but maybe not always in the way you were expecting it too.  I only started my  blogging journey this summer, but my makeup journey has been going on for years.  I wish I could say that my makeup images are Instagram famous and my work has thousands of fans, but that just isn’t true.  In truth, I’m not looking for fame, I’m looking for fans.  I want people to follow me because they can relate, and they enjoy what I post.

I started Pretty & Practical as my go-to place for my life, and my journey.  The things I write, and see, and do, are me.  This is my creative landing spot.  I wanted to be a writer when I was a child, so I created this blog and became one.  I wanted to be a Makeup Artist, so I went to school to further my education.  I wasn’t so sure I ever wanted to have children when I was growing up, and BAM, I became a mother three times over.  Now when I need inspiration, I look to them; my three incredibly different daughters.  They are helping me to create this legacy I hope to leave to them.  They are becoming the legacy I hope to create. 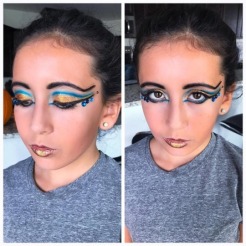 2 responses to “So You Want To Be A Makeup Artist”